skip to main | skip to sidebar

I was on a roll at Hither Green and this year's Easter event was taking place there.

Another two sub-40 rounds secured the title with a storming second round 34, two shots off my record of 32.

Three wins on the trot - Next up...the Stratford Double-Header! 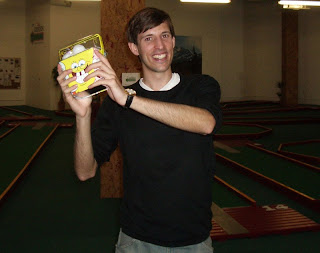 The first Duel on the Felt took place in celebration of my 24th birthday, consisting of 2 rounds followed by a 9-Hole Play-off between the top two players.

With two rounds of 35 putting me clear into 1st place, Andy Exall won through with scores of 40 and 35 to come 2nd and make the Duel! 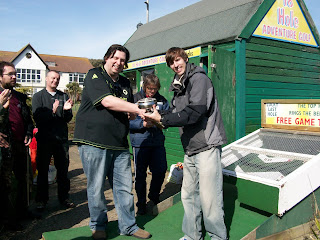 After a close 5 holes 'The Force' took a comfortable lead to the final hole with a nervy 3 to win the Duel! 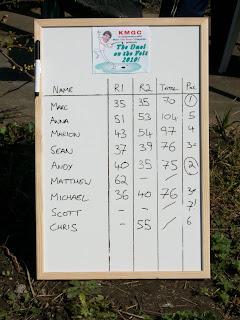 Posted by Marc 'The Force' Chapman No comments:

After an average performance at the Masters, a gathering was arranged in Hither Green to play the Spring Classic 2010.

I was very relaxed just looking for an enjoyable day out and not trying to play for the result. 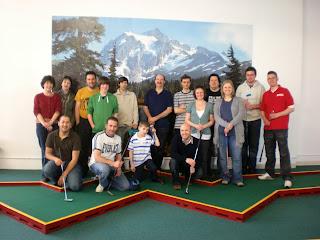 My round of 32 was also a new course record and won me a bottle of champagne from course owner Nick Sandqvist as the first player to shoot a sub-36(par) score since the course opened in January 2010.

I was pleased with the new record but even more pleased with the consistent sub-40 scores on one of the most challenging miniature golf systems in the world. The practice on this type of course at Hither Green will help improve my all-round game, aiming to compete for major UK titles and a place in the British Team for the European Championships this August in Italy.

I would encourage all players to make use of this excellent new indoor facility as it can only assist in raising the standard of UK minigolf.

The next ranking tournaments on the BMGA Tour are the Midlands Open and BMGA British Doubles Championships in Stratford upon Avon in April, with the BMGA Scottish Open in Aberdeen in May.